Electric cars that power your office-on-the-go.

Vehicle to Load. Is this the latest and greatest in EV innovation? 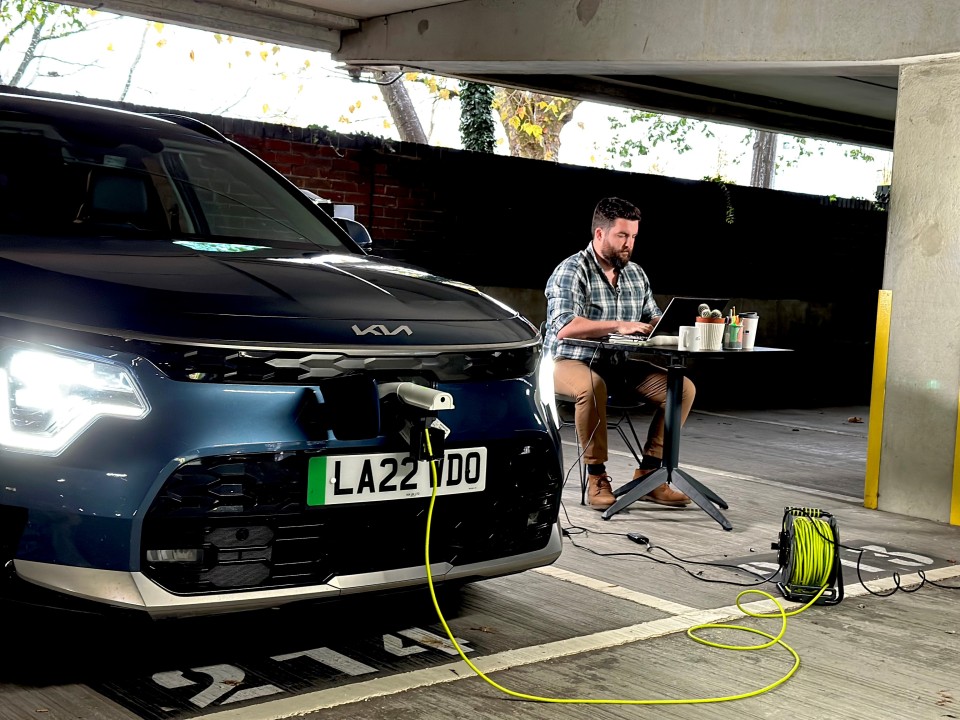 Electric cars are essentially a large battery pack on wheels, surrounded with the latest technology and ripe for innovation, perhaps in ways that just a few years ago would have seemed a pipe dream. My interest was piqued recently by an image of an EV in an underground car park, offsite office neatly set up alongside the car. And the power source for the laptop and much more? The electric car, of course. I contacted the owner of the photo, Ric Boullemier from Generate Media, to find out more.

The photo of Vehicle 2 Load (V2L) in action in a car park is great – what’s the story behind the image?

I was lucky enough to be asked to present a review of the Niro EV for a client as part of a series of films with my team at Generate Media... And we've wanted to shine a light on some of the cool tech that EVs can provide - Like Vehicle 2 Load. Plus, it was raining outside so filming in an underground carpark seemed a smart choice!

Do you think we’ll see V2L in action by many electric car drivers? If so, how do you think it will be used?

I don't think everyone will use the V2L on a regular basis, but I can see how useful the tech could be for all types of drivers, especially if you use the vehicle for a business like ours. It was really useful to have a power source to run our lights and laptops. And even make a cup of coffee and cheese toasty on the road! If you love the great outdoors and family camping trips, this car would be a huge help when plug sockets are hard to find!

Is V2L the next big thing in EV innovation… should we be getting excited about it?

We certainly did. I can't speak for everyone, but just the fact that you can power so many devices with a huge moving battery is really useful. I know it rarely happens, but if a black out occurs... no problem... just plug your fridge into your car! If you're really clever, you could also charge your car during off peak rates or with solar and then utilise that energy from the car at peak times.

If not something like V2L, what do you see as the most impactful innovation in EV technology in the next couple of years?

I've been so impressed with the driver assistance system that completely takes the hassle out of driving. Tesla seem to be leagues ahead of the competition here, which will hopefully inspire more to make the switch to electric. Bi-directional charging, plus improvements in fast charging options with vehicles able to charge in the time it takes to grab and sandwich, drop the kids off and check your emails, will be crucial to the road ahead for EVs.

What one thing will accelerate EV uptake as we head toward 2030?

For me, making the switch to electric made sense on many levels. It was a combination of performance, reduced running costs and air quality improvements. Sadly, cost of charging is going up, and I feel that electricity costs could be slashed if we (the powers that be) make better decisions. We should be throwing everything at creating renewable energy at home to reduce our reliance on fossil fuels. We are an island after all, with abundant wind to take advantage of. We have options, from companies like Britishvolt creating battery cells and jobs, to investing in windfarms with companies like Ripple, and brands like Indra and myenergi who are developing innovative tech in the UK. Their products are helping homes and businesses to become energy independent.

I am absolutely baffled that every new home being built isn't being covered in solar panels. I’d argue that we need a nationwide ban on idling vehicles which would drastically reduce CO2 emissions. It happened over night with the smoking ban. When we put our minds to it, we can achieve greatness.

There certainly seems to be place for V2L as we navigate the technology roadmap for electric vehicles. But how does V2L differ from vehicle to grid (V2G) and vehicle to home (V2H)? I reached out to Nick Raimo, EV specialist and YouTuber to find out.

We hear a lot about vehicle to grid and vehicle to home – what exactly is ‘V2L’, and how does it differ?

The technology that myself and many in the industry are excited over is V2G and V2H. The exciting thing about these technologies is that energy from your car can go from the car either into the grid (2G) or to power your home (2H). With V2G we can sell energy back to the grid to help balance it, in return for payments for that energy. These payments could be three or four times more than the cost it took to purchase that energy. With V2H you could charge your EV with cheap overnight power then power your home from it, or charge up your EV with your solar power and then run your house. This tech has been on the Nissan LEAF and ENV200 (using the CHAdeMo standard) vehicles for some time. We’ve been promised it on CCS cars (pretty much all other cars) and so far we've yet to see anything.

V2L has lots of people thinking it’s similar but it’s a VERY different technology with different niche use cases. V2L stands for Vehicle to Load, and is limited to powering something that doesn't use a lot of electricity - think less than 1 kettle of energy on a 13amp plug. V2L can typically provide enough power to run your fridge or freezer during a power cut, but unlike V2H is nowhere near enough power to plug directly into your home electrics.

Is V2L the next big thing in EV innovation… should we be getting excited about it?

I honestly wouldn't get excited about V2L. In my personal view it’s the car companies trying to pad out features while we wait for the real tech of V2G and V2H. However, I am sure there are some people who will make use of this feature. The best niche for this I can see is people who go camping or away in a caravan; I can see the benefit for these very small niche cases.

Quite a fair range of cars have V2L support these days. The KIA EV6, Hyundai Ioniq5 and the MG4 are a couple of cars that spring to mind.

If not something like V2L, what do you see as the most impactful innovation in EV technology in the next couple of years?

V2G and V2H will be the BIG import features to come allowing energy trading and supply of home electrics. The true battle of V2G and V2H will be if we see it work via DC using a special home charger, or if we see an AC version of it allowing you to use a much cheaper charger. I suspect this may be a war of the two standards; whichever version ends up winning this should mean instead of people fitting expensive home storage batteries with separate inverters they can use the largest battery they will ever own and that's the one in your car.

What one thing will accelerate EV uptake as we head toward 2030 (could be a policy driver, cost parity with ICE, climate awareness…)?

I'm of the belief that EV uptake will take care of itself as we head towards 2030. I see the public shift and attitude moving faster and faster each day, and I think we are only a few years away from friends and family treating petrol car owners like smokers... Smoking around family and friends is often treated with "do you have to do that?!". As the uptake of electric cars happen, these discussions towards internal combustion engines will start to mount social pressure upon them switching, with the benefits being widely shared by current EV owners.