DrivingElectric’s guide to all the new electric cars we can expect to see in 2023 and beyond.

With electric cars making up an ever-increasing proportion of sales, the industry is working flat out to launch new models – here's what's on the way soon 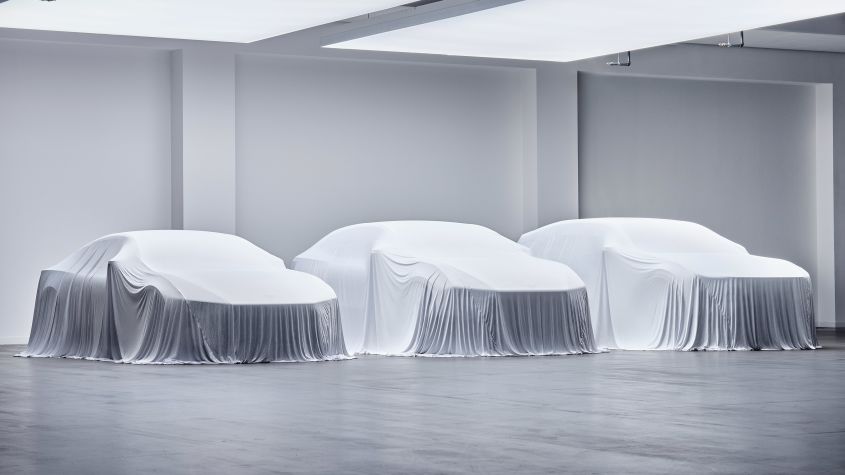 Our list has something for everyone from small affordable city cars like the Volkswagen ID.2 to luxurious SUVs like the Kia EV9 range-topper and sports saloons like the Lucid Air. So whether you’re looking for a city runabout, a sensible family car or a luxury electric saloon to wow the neighbours, you’ll find it here.

So, pour yourself a cupper, get sat comfortably and keep reading for DriveElectric’s guide to the best new electric cars coming in 2023 and beyond.

(Note: We're using WLTP vehicle range estimates in this article, as these electric cars come on sale then a more accurate 'real world' range figure will be used on our website.)

The Alfa Romeo e-SUV – a small electric SUV – is expected to be revealed in 2024. The new Alfa Romeo will have striking styling on the outside similar to the Tonale pictured below. Expect the interior to have a sporty feel and plenty of space for a family of four and their luggage. The e-SUV shares its internals with cars like the Peugeot e-2008 and Vauxhall e-Mokka so it’ll have a 136hp electric motor and a 50kWh battery for a 200-mile range.

The e-tron Concept pictured gives us a good idea of what the new Audi A6 e-tron will look like when it launches in 2023. You can expect it to have a pebble smooth shape on the outside and a high-tech interior on the inside packed full of high-definition displays and touchscreens. The interior will have room for four tall adults with a flat floor that accentuates space. A 100kWh battery gives the electric A6 a range of up to 430 miles.

The BMW i5 is expected to go on sale in the middle of 2023 as an electric version of the new 5 Series saloon. It’ll have styling based on the sleek BMW i Vision Dynamics concept car shown above with a blanked-off grille and smooth wheel trims designed to improve aerodynamics. You can expect the i5 to have plenty of power and a range of more than 300 miles. Inside, the i5 will feature a posh interior design with large infotainment screens, room for four and a big boot.

The Cupra Tavascan will join the Born in Cupra’s electric lineup in early 2024. The Tavascan is a small crossover with striking styling combined with a boxy shape that gives it plenty of interior space for a growing family. The Tavascan will launch with 303hp, four-wheel drive and a 77kWh battery that will give it a range of around 280 miles. Lower-powered models with a longer range are expected to follow at a later date.

The Cupra UrbanRebel is a small electric crossover that will compete with the likes of the Peugeot e-2008. The concept car shown here is said to be 95 per cent representative of the finished model so you can expect striking exterior styling and a sporty interior with large infotainment screens and space for four adults.

The UrbanRebel will have brisk performance off the line and is likely to have a range of around 270 miles.

The new Fiat Panda is set to be one of the cheapest EVs on sale when it lands in showrooms at the end of next year. Expect to see cheeky styling based on the Fiat Concept Centoventi concept on the outside and a well-designed interior with space for four tall adults at a push, a small boot and plenty of interior storage. The new Panda is likely to get the same 42kWh battery as the 500 Electric, giving it a range of around 200 miles and peppy in-town performance.

The Fisker Ocean is an electric SUV rival to the Tesla Model Y and is expected to go on sale next year priced from around £35,000. You get three models to choose from offering up to 543hp, 0-62mph in as little as 3.6 seconds and a maximum range of 390 miles aided by solar panels in the car’s roof. A practical SUV, the Ocean will have space for four adults but the talking point of the interior is the Fisker’s huge revolving infotainment screen.

The Jeep Wagoneer S is an electric SUV that will compete with models like the Audi e-tron and Mercedes-Benz EQC. Outside, it gets traditional boxy SUV styling with modern features like a light-up grille and rear light bar that hint at its electric powertrain. The powertrain will take the form of two electric motors making the Wagoneer four-wheel drive and giving it acceleration of 0-62mph in 3.5 seconds. Expect it to have a range of close to 400 miles between charges.

The Kia EV4 is a small electric SUV that’s scheduled to arrive early next year. Expect the EV4 to have similar styling to the Imagine show car seen here with a coupe-like sloping roof. Inside, the EV4 will match a Sportage SUV for interior space with a big boot and a roomy back seat. Under the skin, the EV4 is likely to have a 77.4kWh battery – for a range of around 300 miles – that can be charged from 10-80% in around 20 minutes using a public fast charger.

The Kia EV9 is a big electric SUV that will serve as the flagship of Kia’s range. It looks like a traditional SUV with chunky, imposing styling and a square profile, but under the old-school body, you’ll find high-tech underpinnings. The EV9 is expected to have two electric motors making it four-wheel drive and a big 100kWh battery that’ll give it a range of 400 miles. Inside, the Kia will boast seven seats and a posh interior design with large infotainment screens.

The Lucid Air is a saloon with space-age styling and performance that wouldn’t seem too shabby in the space shuttle  – it gets from 0-62mph in as little as 2.5 seconds. It also has an impressive 500-mile range, backed up by charging speeds that mean you can add 300 miles worth of juice in just 20 minutes. Inside, the Lucid has a huge digital dashboard display backed up by a centre touchscreen, and cabin space to compete with conventional saloons like the Mercedes E-Class.

The Mercedes EQE SUV will slot into the company’s electric SUV range between the EQC and EQS. Pictures of the finished car have yet to be revealed, but Mercedes has released an image of the interior which will have plenty of room for four adults and gets the company’s astonishing Hyperscreen infotainment display. The EQE SUV is likely to get the EQE saloon’s 96kWh battery, which will give it a range of around 350 miles.

The MINI Aceman is an electric SUV that’s set to get striking looks in line with MINI’s youthful image. Inside, you’ll find a highly-customisable cabin with large infotainment screens and space for a family of four. The Aceman will be designed as an electric car from the ground up so expect it to have a flat interior floor that accentuates the feeling of space.  The Aceman will be offered with a 40kWh battery for a range of 190 miles or a 50kWh battery giving 250 miles.

The new MINI Countryman will go on sale next year and will be offered as a pure electric model, as well as petrol and diesel versions. The electric version is set to share components with the new BMW iX1 meaning it’ll have a 76kWh battery giving it a range of 272 miles and charging speeds of up to 130kW. Inside, you’ll find two large infotainment screens and a floating centre console. On top of its retro design, the interior will have space for four adults and a boot that’ll swallow a number of suitcases.

A new MINI 3-door will be launched next year and will include an all-new MINI Electric model. Expect the new MINI Electric to keep the cheeky styling of the old car with a wide range of personalisable options like alloy wheels, contrast colour schemes and racing stripes. It will be much the same on the inside where you’ll get numerous upholstery and trim finishes to choose from. Space in the back will be tight for adults and the boot will be small, but expect the MINI to make up for this with nimble handling, nippy performance and a near 200-mile range.

We’ve yet to see pictures of the new Polestar 4, although the car has been teased under (silk) cover as seen here. It is expected to be a small, sporty SUV with a coupe-style roofline. Inside, you’ll find a minimal design. A large Google-powered infotainment screen will be used to control most of the car’s system. The Polestar will be offered with a range of battery capacities including a 78kWh option that will give the new SUV a maximum range of around 300 miles.

The Polestar 5 will be the star car in the company's range. With a five-door coupe body, it’s sleek looking but also practical with room for four tall adults and a boot that’ll swallow a set of suitcases. You’ll get performance to match the sporty looks with 800V electrical architecture allowing twin electric motors to produce up to 872hp combined for 0-62mph in less than three seconds. The Polestar 5 is likely to have a range of around 300 miles.

The Renault R5 will trade on the same trick as the MINI Electric and Fiat 500 Electric by offering you a high-tech EV powertrain wrapped in a retro bodyshell. Expect the 5’s cute interior styling to carry through to the inside, where you’ll find space for two adults up front and a back seat that’s best reserved for kids. The R5 is expected to get a 136hp electric motor and 52kWh battery that will give it a range of around 250 miles between charges.

The Volkswagen Aero-B / ID.AERO saloon is an electric alternative to the company's petrol or diesel-powered Passat. It’ll get an aerodynamic design in line with VW’s other electric models – cars like the ID.3 and ID.4 – and will feature Volkswagen’s ID.Light (a strip of LEDs that boosts the power of the car’s headlights). The Aero-B will have a flat interior floor that’ll increase interior space and an infotainment screen with augmented reality sat-nav. The Aero-B will have up to 335hp and a range of 385 miles.

The Volkswagen ID.2 was previewed by the ID.Life concept shown below, it’s a small electric car that’s expected to undercut rivals like the Renault Zoe and Fiat 500e in terms of price. Inside, you can expect to find large infotainment screens and space for two adults and two kids. Volkswagen seems likely to give the ID.2 a 57kWh battery that would give it a range of nearly 250 miles between charges.